8 Steps To Make Your Own Cursive Lettering In Adobe Illustrator

What first pops into your mind when you think Coca Cola, Kellogg's and Cartier. The stunning cursive lettering in their logotypes right?

If you're launching your first business, you'll also want to create a logo that you can be proud of.

You'll want something unique and tailored to your business, right? Something that makes your business stand out amongst the rest.

And there's nothing more unique, and nothing that packs more of a punch than putting together your own cursive lettering from scratch.

With the help of one of our top freelancers nata01, we’ve put together this guide on how to make your own cursive lettering in Adobe Illustrator. 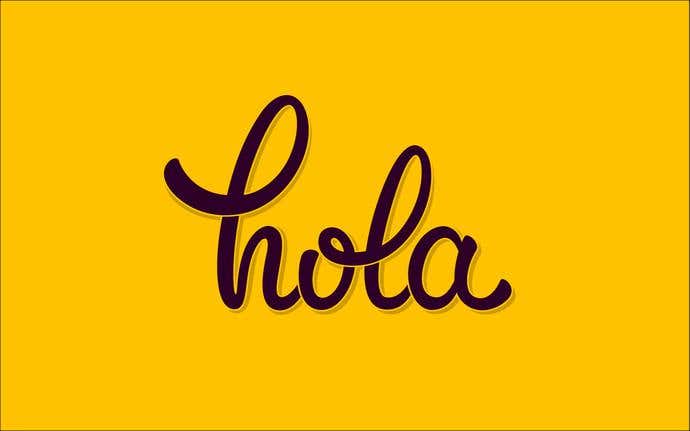 To get a really good feel for the word or phrase and the way that I wanted to represent it, we painted the word out a few dozen times on a piece of paper.

PRO TIP: Do this over and over in order to feel the flow of the letters, until you're satisfied with the positioning of each of the letters in the word or phrase. 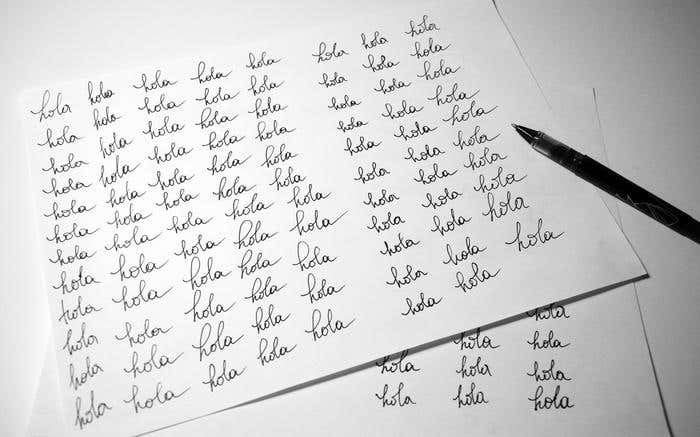 Choose a few versions that you like the best and give it some volume. Play around with making some parts thicker and bolder, and giving the letters some depth. 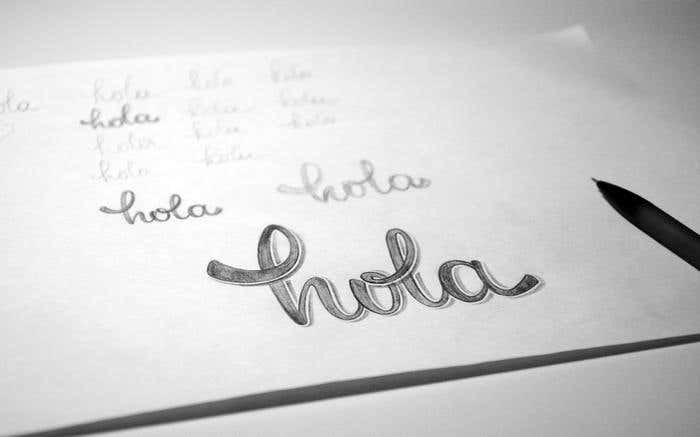 Once you have practiced and decided on the way you want the letters to look and work together it’s time to draw a good sketch of your word. You need to take your time creating exactly what you want the word to look like.

PRO TIP: Think about kerning, tracking, and any flourishes you want to add to your lettering. 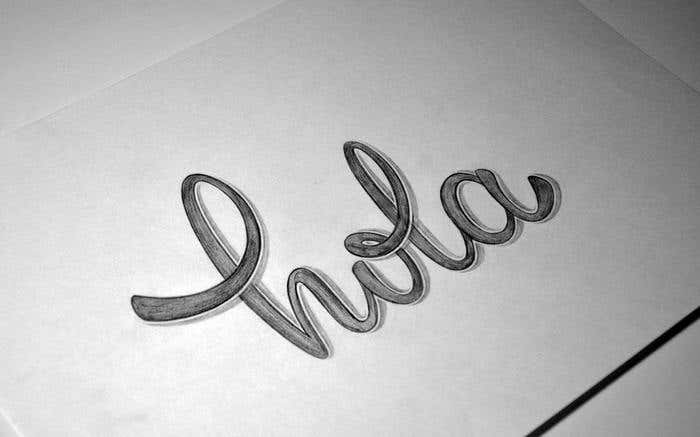 You can choose to add some shadowing at this point. Think about where your light source is on the page. If it’s on the left, most of the shadowing will come from the right. This will be the final sketch before you upload it and develop it digitally.

You need to scan the image in order to vectorize the design. You can do this using either a scanner or even an iPhone camera. You just need to ensure that if you are taking a photograph that it is from an orthogonal angle which is important in order to avoid geometric distortion. 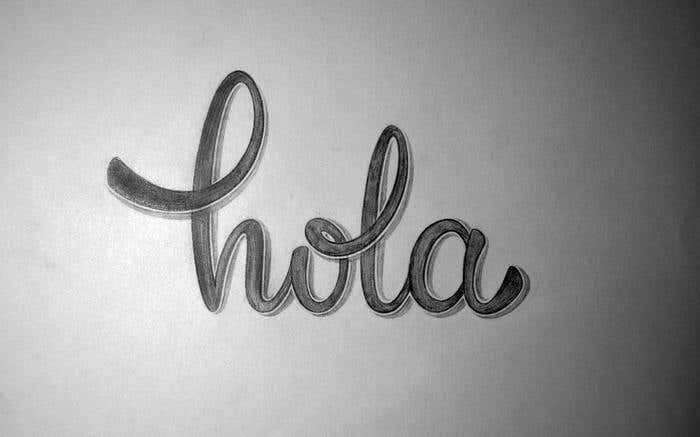 Now open your sketch in Adobe Illustrator. To make it easier to trace, it is best to make the background layer that you’re working on transparent, and then lock it on the navigation panel so that the letters do not move.

This is the delicate and detailed part. You need to start tracing the outline of the letters with the Pen tool.

It is best to isolate and sketch each letter separately. Keep in mind what the letter looks like by itself, and also how it connects to the letter next to it. 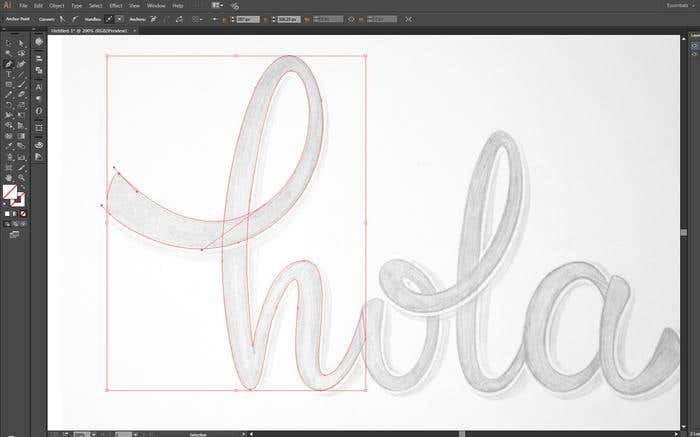 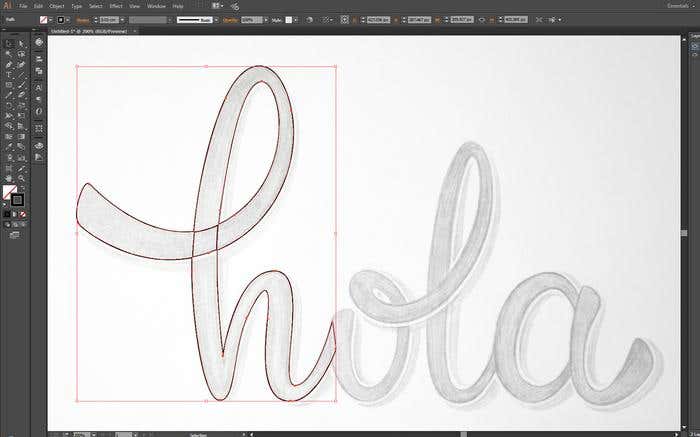 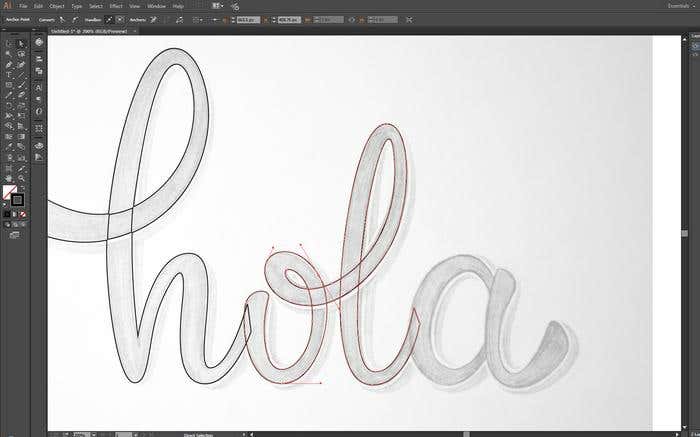 While handwriting is imperfect, professional lettering can’t be. Because you may choose to use some of these letter combinations for other words later, the in-strokes and out-strokes need to be as standardized as possible. Otherwise when combined with the other cursive letters they won’t match up and join together property. And the flow will be interrupted.

PRO TIP: Even if you initially don’t think that you’ll use these letters for other projects, it’s still best to try and standardize them just so you get into the habit.

By now, you’ve successfully moved your hand drawn sketch to a digital version! Once all the letters are outlined, check the settings of the stroke so that the angles of the letters don’t look to sharp or too soft. Feel free to experiment with thickness here. 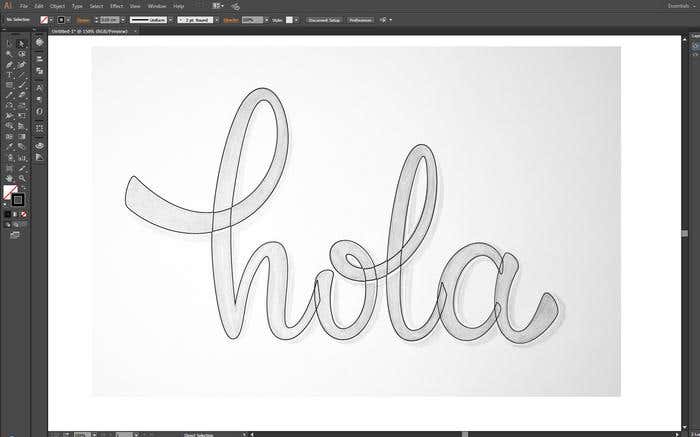 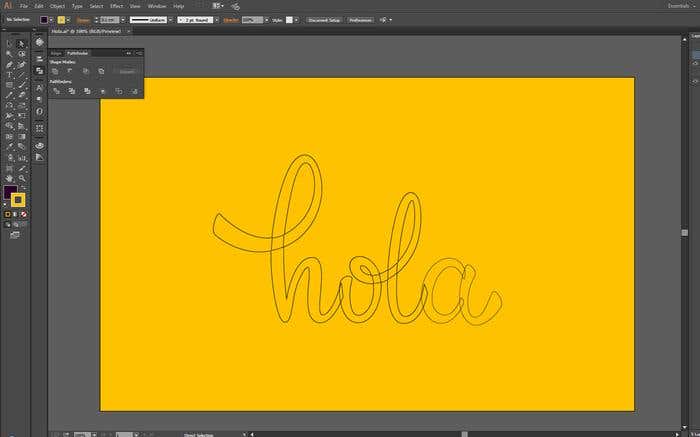 You can add some fill to the letters. Experiment with different colors, so that your cursive lettering really pops! Review the look of your design again and adjust the letters if they look too thin or thick.

PRO TIP: Remember that every time you make changes save a copy so that if you make a mistake you can always revert back to a previously saved version. 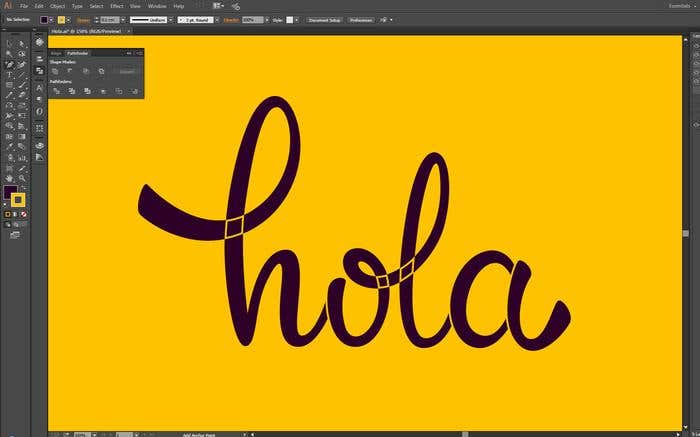 Add in any shadow or other effects to the letters. 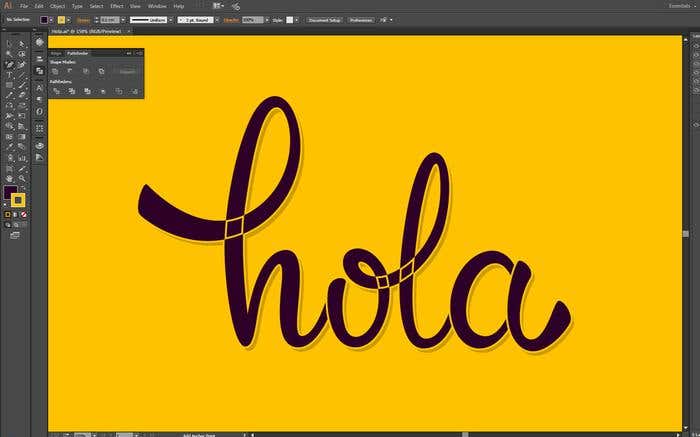 Use gridlines to help you to see the height of each letter in relation to the others. It is important that the letters are consistently the same height. 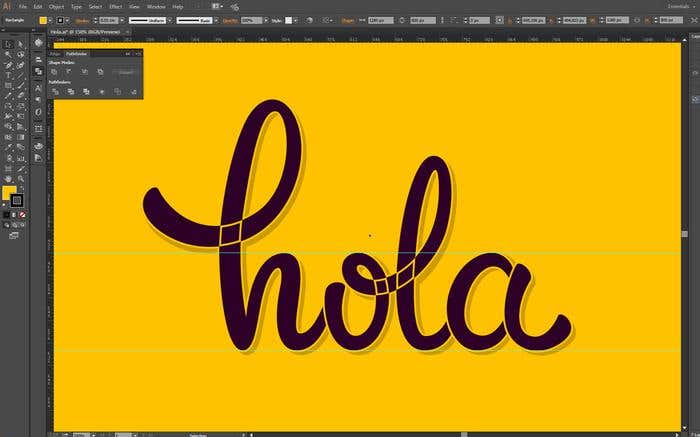 If you see that some of the letters are tilted, and some are straight then you need to decide how it will look as a word. If the cursive lettering is tilted or straight it can give it a different look and feel.

If you choose tilted or straight all the letters should take that style. It can look messy and inconsistent if some of the letters are tilted and some are straight. This is particularly important if you are going to use these letters in other projects where they may be connected to new letters. Consistency is key.

For this project, we chose to tilt it slightly to the right. This also means that we needed to adjust the shadow slightly. This can be done using the Transform function. 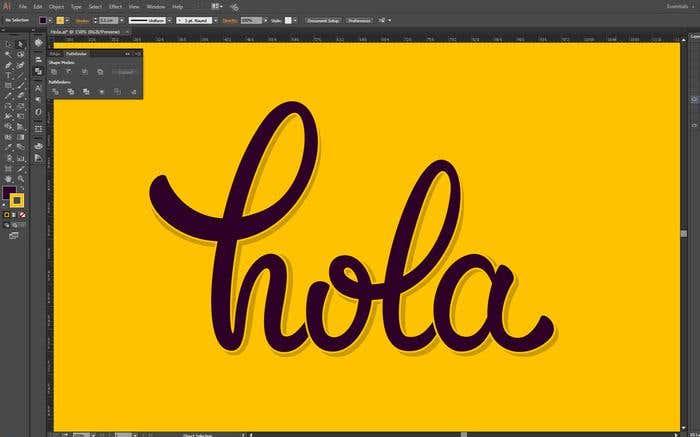 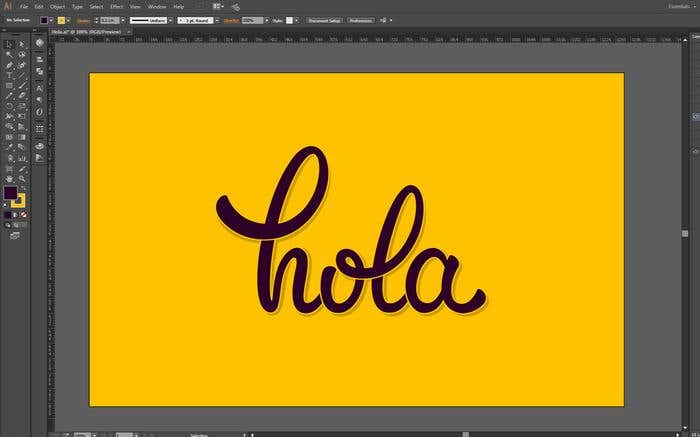 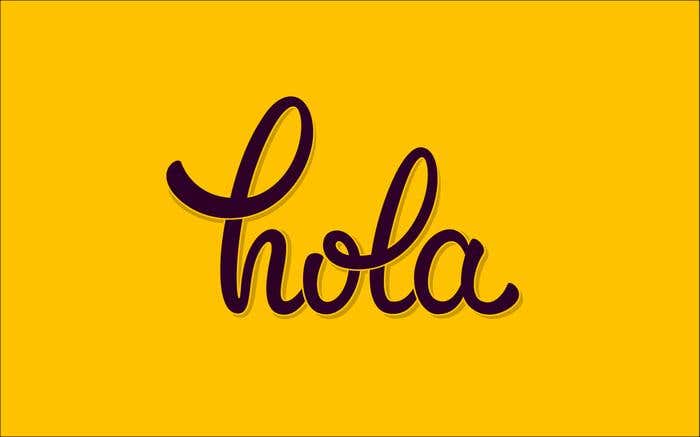 Whew! That was quite a process. By now, you’re probably created over twenty different lettering versions of your word. You’ve seen it with a swoosh, without one; with a flick here and a flick there.

Even once you think you’re finished - walk away! Take a break and don’t look at your design for a few hours or even until the next day. You will find that after taking a break, when you return with some fresh eyes, you’ll be able to see any mistakes and correct them!

Got a big project that needs some custom cursive lettering?

That was just the basic stuff. If you have a branding, t-shirt design, or advertising project that requires some curisve lettering or an entire font to be designed then look to Freelancer.com. With thousands of the best graphic designers from around the world, you’ll be sure to find the perfect cursive lettering expert for your business. Post a project now, and receive bids within minutes!

A step-by-step guide to plan, search and pick photos for your blog post that will wow your audience.

In this article, freelancers can learn all about the proper ways to use color in web design.

Avoid following key mistakes while creating and setting up your new e-commerce website. Make sure that your customers find it easy to use.

Letter Fonts: The Best 25 Free Cursive Fonts To Spice Up Your Designs