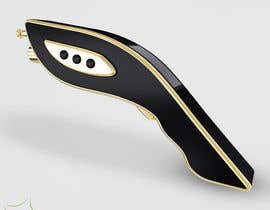 Hi, I need a design of the Electric Acupuncture Gun. Now, only the DESIGN, I'll give you some guidelines. We don't need a technical drawing right now, that will be paid as a second project. So, first, we will do design, and then we will technical drawing for the manufacturing (Solidworks, Fusion360, or similar). Right now we need a design solution.
1. It has to look like a "gun". Similar to Laser Pain Relief guns. But a little bit different, modern. We had few designs before, but we are not satisfied. Basically, it is ok, I will post it here and it can be used as a guideline, but we want more...style. Less "simple gun" look, the bigger angle between the point and handle...angle to be more smooth.
Now, we need to have two points in the gun area. One is for metal electric stimulation, the needle, and that part goes up. So, it is not like on our sample drawing, here the needle goes up, not down. Down is space, with 2cm in diameter, for laser. So, yeah, the gun will have an electric stimulation and a laser.
So, yeah, it looks similar to a thermometer, but I don't want that. I would like it to look more like some already finished product. But it will have a much bigger head and body. But you can see the angle on the sample.
We will actively guide you through the contest. After that, we will run the new project for transferring the design to the production drawing. Of course, if somebody knows both, he will be paid for both parts of the projects. But, now, the priority is design.

Here are the files:

“Great guy, glad to have working with him.”