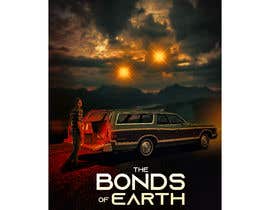 The film is entitled "The Bonds of Earth".

UPDATE: Please no more submissions showing the breadbox, TVs,, or VCRs. There have been MANY and I have decided that these are just not right for the poster after all.

It takes place in 1983 in West Texas near the towns of Alpine and Marfa. The story follows a desperate father as he struggles with a hybrid human-alien device (a "breadbox") to make contact with aliens to arrange for the return of his abducted five year old daughter.

As far as artwork for the film is concerned, we never see aliens or UFOs. The only evidence seen is near instaneoneous flashes of royal blue when an abduction takes place. (So, please no flying saucers or creepy aliens.)

The feeling, tone, and look of the film is very similar to two well-known films that take place in West Texas: "No Country For Old Men" and "Hell or HIgh Water". Another film "The Vast of Night" captures the awe and mystery of alien presence and abduction that our film is going for.

An example scene that might make an interesting poster would have our main character, 30-ish man, standing at the rear of a station wagon with the tailgate down, a breadbox on the tailgate, headphones on his head while fiddling dials on the breadbox, with the horizon distant beyond. Maybe glowing orbs on the horizon. Maybe a burst of lightning. Maybe both.

Another key scene idea is an indoor electronics workshop, perhaps in a garage, where our main character works at a workbench seen with stacks of VHS video tapes, the breadbox, black and white TV screen(s), a VCR, a wall of UFO/outer space artwork.

Not everything listed in either of the two scenarios is necessary in the image. In fact, it would be way too much. Each description above just sets the scene that you may interpret. OR COME UP WITH YOUR OWN.

Images of many of the props to be used including the breadbox, a wagon wagon, and of representative West Texas landscape are provided.

I am looking for stylistic interpretation of the title which may be used on a poster and as the title card of the film AND a image representing the film using one or more of the elements described that can be used as a promotional poster.

Also in the images are two posters for "The Vast of Night". The super simple one just uses an image of a telephone switchboard which is a key element of the film -- much like we use the "breadbox". I actually prefer this one over the one showing faces.

The image should be something simple and straightforward. Elegant. Engaging. If your submission is too busy or cluttered, it is likely to be rejected.

Please use Photoshop and have your deliverable be a layered PSD file and font (if necessary).

“wonderful experience with a talented designer”