ILLUSTRATION OF A CHARACTER IN CARTOON, COMIC OR MANGA STYLE 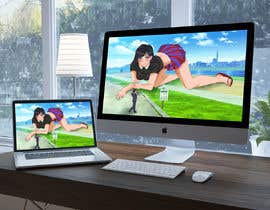 I need an illustration of a character. The style of this illustration is free: it can be comic, cartoon or manga, as you like.

CHARACTER CHARACTERISTICS
The character is a girl named Raija. In the image "Raija" you can see how she´s dressed, her size and what she looks like.
Raija is a young girl, she will be about 20 years old or so, she´s carefree and cheerful, she´s almost always seen smiling with a mischievous and mocking expression.
THIS CHARACTER IS A GIANTESS. IT´S VERY IMPORTANT TO REPRESENT HER AS SUCH, with an object of normal size (smaller) next to her. In the illustration she must be seen as a giant-sized person. The size may vary, you can see it in the file "Raija", but it has to be more or less faithful to the original.

The CHARACTER´S CLOTHING has to be the one that appears in the Raija file (black top, red plaid kilt and sandals). It´s preferable that it be these clothes. But there is the possibility of drawing her with an alternative clothing. An example can be seen in the file "Alternative Raija". If you think the character will improve by putting on different clothes, it´s your choice. If you think that she will improve by dressing her in a different way, or by changing some element of her normal clothing (the top, the skirt or the sandals), you can do it. What is valued is capturing the sexy, carefree and cheerful character of Raija, the giantess.
THE CHARACTER´S FACE: the face and hair in the drawing must be the same as those of the character, as it appears in the Raija file
STYLE: You can choose the style you want: if you want to represent her as a manga character, with the big eyes, you can. Or if you prefer, like a comic book character. Or a cartoon. That is up to you.

CHARACTER POSES
You can represent the character in any position you want, as long as it´s clear that she´s a giantess and not a normal-sized person. The idea is to reflect the carefree and cheerful character of Raija.
In the file "Postures" there are some images that show possible examples of postures in which the character could be drawn. That serves as inspiration, but of course if you have a different idea you can do it with complete freedom, as long as you capture the spirit of Raija, the giantess.

EXAMPLE
An example of the type of illustration that could be submitted to the contest is this drawing, the one in the "Example" file, and the one where you can see an image of Raija. As you can see, apart from being a talented cartoonist, with a good technical level, the artist has managed to represent the sexy and carefree spirit of Raija.

DESTINATION
The final destination of the illustration, therefore, is to be published on the internet. It´s not for printing, but so that it can be seen on the screen of a PC or a smartphone.
In addition to the winner, it´s possible that some of the best drawings will be selected to be published on the same website, but that would be decided once the contest closed.
You can make the illustration how you want: in black and white, or in color, but the better and more complete it´s, the more possibilities there are to win the contest.
If you need any clarification, ask what you want.
Have fun!