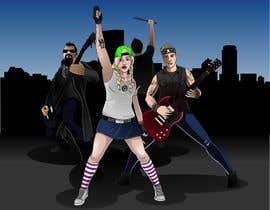 Hi there, guys! My name is Nika Comet! I'm a frontwoman for MyRockBand (myrockband.ru ; youtube.com/myrockband2012). I need MyRockBand drawn as comics characters! Just one image (PSD or PNG in best resolution, most supposedly made in vector) for now (it will be used for flyers, stickers and maybe shirts later so it should be in a really good resolution).
The opportunity I'm offering is not just for one time, I'll need our characters to develop, change and in a while we'll probably have a whole comics book! So I'm really interested to see:
1) us (we should be recognizable and our main features should be exaggerated)
2) a good comics style (bright, cutting-edge, and cool as f*ck)
3) your own unique style (I really appreciate and encourage it as a creative person myself!)
I made a sketch (don't judge me strictly, I'm a singer) so that you guys could understand what I mean.
There are 4 of us in the band: Nika (vocals), Alex (guitar), Chris (bass) and drummers change often for now so let's try to show the drummer's face not clear.
Nika: athletic a bit chubby as a teen but womanish, something between tomboy and a lady, a rock-princess to become the queen, young Lara Croft. Hat "Turtle Power", tattooes, don't forget a birth-mark next to lips. Eyes: green. Hair: silver. (For more portrait match, Instagram @nika_comet)
Alex: true musician of a metalcore band. Do-rag on the head, tunnels in his ears, ragged jeans. Guitar: Gibson SG (cherry). Eyes: green. Hair: Dark-blonde. (For more portrait match, Instagram @alexcrimson)
Chris: metal-man. Big and severe like a bear. Wears long black coat, wide white pants and sunglasses. (Instagram enger_chris, photos where he's tagged).
Drummer: maybe you'll have some other ideas how to make his face unclear. I just put him like this:)
The image should be perceived wholesome. The color and composition center should be on the singer. It's not necessary to copy positions I drew, make yours, they just should match characters.

“Great style, excellent work approach and communication! Rotlinga was very quick and attentive to the revisions I asked for and he has an exceptional "feeling" for what he does! Recommend!”